The BEST of the Florida Keys

By: Jeff & Kathy Wildrick
With: 2 Comments

Each winter since we’ve been RVing we’ve had the goal of going to the Florida Keys. But between bad weather, full campgrounds, and family commitments, it’s taken us until this year to make it. And wow, was it worth the wait!

There’s something magical as you leave the mainland, driving south on US 1. Island by island, bridge after bridge, the water seems to get bluer and the scenery more serene. Our goal was Big Pine Key, where we had reservations for ten nights at Sunshine Key RV Resort. Normally campsites at Sunshine Key can cost $110/night or more, but as members of Thousand Trails we’d purchased what they call the “Trails Collection” that allows us to stay for up to two weeks at most Encore resorts. Most are free for Trails Collection members, while a few charge a $20/night resort fee, which is what we paid at Sunshine Key. 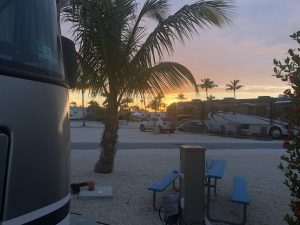 Sunshine Key is a beautiful resort. Unfortunately, most of our days there were windy and a bit on the cold side, but Jeff still got one dip in the heated pool, which was marvelous. Activities were also greatly reduced because of Covid-19 protocols, but it looked like this place must be a lot of fun during normal times. Large, level full-hookup campsites, many with ocean views, make this a great base for exploring the Keys.

In our video, you’ll see some of the highlights of our stay, but here are a few more details:

This beautiful historic park and wildlife sanctuary is well worth spending an entire morning or afternoon of your vacation. There are a series of well laid-out nature trails that introduce visitors to the local flora and fauna, and several historic buildings such as the Adderly House (long-ago home of a former slave who settled on the island and supported himself and his family through fishing and selling natural sponges), and the Crane House which overlooks the windswept ocean (it was VERY windswept the day we were there) and features a dock where you can get a “fish pedicure.” It’s weird, ticklish, and something you shouldn’t miss. There’s also a “Cracker House” which recreates the living quarters of Florida cowboys, and a bird rescue center where injured birds are either nursed back to health and released, or given a nice retirement home until they die. 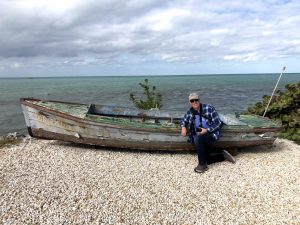 Years ago we had the opportunity to visit the Key West Butterfly and Nature Conservancy while in port on a Caribbean cruise. With Kathy’s love of butterflies and birds, it was only natural that this was our first stop in Key West. After a brief introductory film you pass through an airlock into a vast greenhouse filled with birds and butterflies. Everywhere you look you see color and motion, and sometimes one of them will even land on your hand as you pass by. Ever the romantic, Jeff enlisted the help of an employee in the gift shop to buy Kathy a pair of butterfly earrings – a happy souvenir of one of her favorite places. 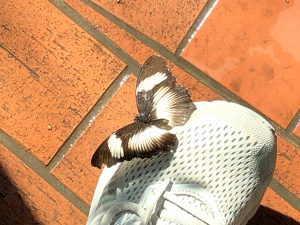 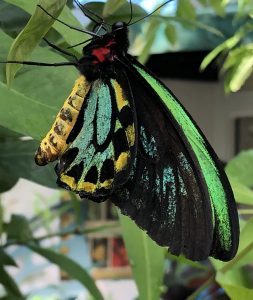 Our next stop was the Ernest Hemingway House. Even though neither of us are huge Hemingway fans, it was fascinating to get a glimpse into his life and era by touring the building and grounds, led by a fantastic guide who has worked on the property for years. And, of course, the house and grounds are full of the famous six-toed (Polydactyl) cats. They are quite used to tourists, and many are willing to be petted and admired. 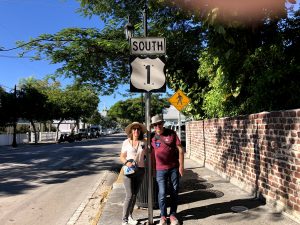 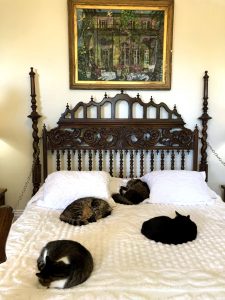 Although not in the video, we also walked to the southernmost point in the United States which is marked by a large, colorful buoy. However, the line to have your picture taken there was far too long to be worth the wait, so we just took a couple of pictures from the street. 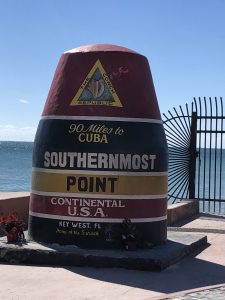 To tell the truth, this is one of those excursions that looks a lot more fun in the video than it was in real life! We were very excited to rent kayaks at the park so that we could explore along the shore. However, the shallow kayaks had no seat backs, which meant no support while paddling, and it wasn’t long before Jeff’s back was killing him. There was so much wildlife to see, from birds to crabs, a stingray to many Portuguese Man ‘O War jellyfish! Jeff bravely paddled on! (Well, actually Jeff moaned and groaned as he paddled along.) We hope the video we captured was worth the effort, and have vowed in the future to always check what kind of kayaks we’re renting before we sign on the dotted line. 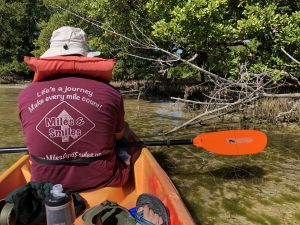 There is so much history to share about Pigeon Key. In the late 1800s, Henry Flagler began building a railroad along the east coast of Florida as a way of developing trade and tourism in the state. In 1905 he began a project to extend the railroad 113 miles, all the way from Miami to Key West, by building a series of bridges from island to island. To many, this became known as “Flagler’s Folly.” One of the most daunting challenges was to build the seven-mile bridge between Marathon and Big Pine Keys. Pigeon Key, immediately to the south of Marathon, became a major staging place for building the new railroad, including housing for all the workers. In 1912, Flagler rode the first train to Key West. Sadly, on Labor Day in 1935 a major Category 5 hurricane passed directly over the Keys. Over 300 people boarded a northbound train in Key West, hoping to escape, but they were not able to beat the storm and perished when a giant wave swept the train off the track and into the sea. Another hundred or more died on the islands. Miles of tracks were destroyed, and the railroad went bankrupt, never to reopen. 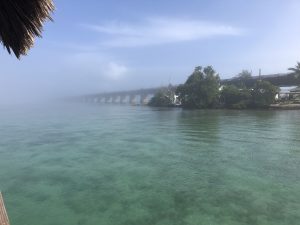 Eventually the government rebuilt the bridges and opened a two-lane highway that was barely wide enough for two vehicles to pass. It was so intimidating that quite a few tourists hired local residents to drive their cars for them rather than brave the perilous bridges themselves!

Pigeon Key has gone through many lives since the railroad, from resort, to movie set (True Lies with Arnold Schwarzenegger & Jamie Lee Curtis, and a finish line for The Amazing Race), to its current use as a marine life education camp and tourist destination. It’s well worth a visit.

Are the Florida Keys worth all the effort? We think so!

We hope you enjoy the video! Please leave any questions or comments below.