One of the top problems reported by RVers is waste tank monitors that just don’t work!

In theory, with a simple push of a button on your RV’s control panel, you can see just how full your tanks are so that you know for sure when they need to be dumped. The problem is that most monitoring systems installed by RV manufacturers are simply, excuse the expression, “crap.” After a couple of uses the monitors typically read “full” all the time, which means that you really have no idea how much capacity you have left.

Factory tank monitors rely on a series of metal sensors installed at different levels that extend inside the walls of the waste tanks. When wastewater reaches one of the sensors, it creates an electrical connection that sends a signal to the control panel inside the RV. Simple.

The problems begin when sludge begins to build up on the inside walls of the waste tank. In the black tank, that sludge is made of human waste and bits of toilet paper. In the gray tank it’s grease and soap scum from the sinks and shower. When the sludge gets thick enough, it too makes an electrical connection that tells your control panel the tank is full.

The first line of defense against this problem is to clean the inside of the waste tanks, and there are dozens of products that claim to help you do this. At any RV store you’ll find a variety of liquids and powders to pour down your drains that claim they’ll clean and maintain the inside of your tanks, as well as reducing tank odors. Some folks swear by a homemade mixture of water softener and detergent. Others have tried dumping bags of ice cubes into their tanks hoping that the ice will scrub them as you drive down the road. From my experience they all work a little, but none are great.

The only cleaning method I’ve found that really works on a black tank with a significant amount of built-up crud is to use a power sprayer inside of the tank. These sprayers can be built in (such as the Sani-Flush system), or you can buy a flexible wand (such as the Camco RV Flexible Swivel Stik) that you attach to a hose and insert into the black tank through your toilet. Not pleasant, but it does clean the tank and probes – at least until the next time the tank gets full.

Unfortunately, I have not found any product that thoroughly and reliably cleans the gunk from the walls of a dirty gray tank, and there is no way to physically insert a sprayer.

One great way to assure accurate tank readings is to replace the entire factory system with a new “SeeLevel” monitoring system. The SeeLevel actually uses externally mounted sensors that somehow accurately sense the fluid level inside of the tanks. It seems like magic to me, but all of the reviews say that it works.

Unfortunately, installing a SeeLevel system on my RV (and I assume most others) is a very expensive and complicated proposition. In addition to attaching the external sensors (fairly easy), it involves replacing the electronic monitoring panel inside the RV, which means you’ll also have to replace the sensors on the freshwater tank, rewire the propane meter, and rewire the battery monitor.

Everything I’ve read suggests that this system works wonderfully, but to me the installation process seemed daunting and the price is a bit high—about $250-$300.

Ultimately we decided to try a simpler solution: replace the factory-installed sensors in our tanks with Valterra Horst Miracle Probes. These come in two models, one for gray tanks, and the other for black tanks. In both cases, these Teflon-coated probes extend far into the tank, beyond any gunk encrusted on the walls. The black-tank probes also have a protective hood to shield them from floating debris such as tiny bits of toilet paper. 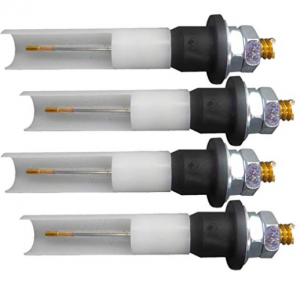 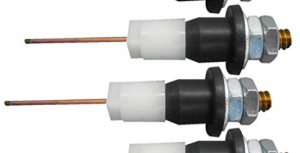 Installation is easy and does not require you to run any new wires. In all cases, the first step is to drain your tanks! In many cases it’s then as simple as unscrewing the manufacture’s probes from the outside of the plastic holding tank, screwing the new Horst probes in, and transferring the wires from one to the other. In our case the old probes were not removable, so I had to drill new holes into the tanks, insert the Horst probes, and transfer the wires from one to the other.

Because we have an installed black-tank cleaning system, I initially replaced the probes only on our gray tank. The job took about an hour and would have taken less if I hadn’t been filming the entire process! The probes come in packs of four, and it turns out that our tanks have six probes each, so I had to buy two packages. The system worked so well that I went ahead and replaced the probes on our black tank as well.

Here’s the good news: You can use black tank probes in a gray tank, too. If you’ve got six probes on each tank, I suggest buying two packages of black-tank probes and one package of gray-tank probes, then using four gray and two black probes in your gray tank. It’ll cost you less than $100.

After several months and thousands of miles, we’ve had only one problem. Due to road vibration, several of the nuts that connect the wires to the probes had loosened, causing intermittent false readings. After retightening the nuts, I placed a bit of nail polish on the treads to stop this from happening again.

I highly recommend Horst Miracle Probes. For less than $100, we can now count on accurate readings of our tank levels, which is much more pleasant than simply waiting for the shower or toilet to back up!

Have you tried any other solutions to the tank monitoring problem on your RV? We’d sure like to hear about them. Please share your questions and experiences in the comments below.

Visit our new online store and get cool Miles and Smiles swag! Dismiss