By: Jeff & Kathy Wildrick
With: 4 Comments 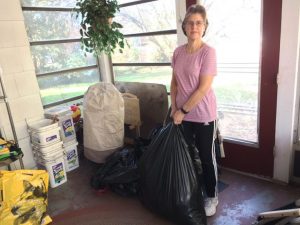 We’re moving in less than eight months, and I (Kathy) have started to get serious about downsizing.

I’ve donated five bags of clothes (and a bag of shoes) to a local clothing ministry, taken books to the library, and donated my kids’ juggling equipment (with their permission) to our public school’s awesome juggling program. Downsizing is an enormous project, since we’ve been in this house for almost 17 years, and adopted three children after just the two of us moved here. Honestly, Jeff and I had a lot of stuff, even after consolidating our possessions when we got married after about 20 years as single adults living on our own. Now we’ve got our kids’ stuff too.

I walk around our house and see so many things that I want to get rid of. And some things I don’t.

We know we don’t want to keep our living room sofas, but we can’t get rid of them yet. I see an abundance of such things that we’ll need until the last few weeks unless we want to sit on the floor to watch TV and eat our meals. And that’s a possibility, but not for eight months.

I’ve been reading, and now rereading, a helpful little book called The More of Less by Joshua Becker. He talks about a movement called minimalism, in which people are trying to live with a lot less stuff so that they can be free to pursue their dreams or find out their life’s purpose other than caring for their stuff—and we spend a lot of time caring for our stuff, don’t we?

But for what end? As the saying goes, you can’t take it with you. And the wise King Solomon, who spent a lifetime accumulating palaces and gold and silver and wives and servants, said, “Yet when I surveyed all that my hands had done and what I had toiled to achieve, everything was meaningless, a chasing after the wind; nothing was gained under the sun” (Ecclesiastes 2:11).

I think the Tiny House fascination is a part of this movement towards less. We actually have a pretty small house on a beautiful lake about an hour from where we live now. The two bedrooms are only eight by ten feet, which allows for a double bed with a headboard and a chest of drawers in the closet. That’s it. We’ve consulted an architect about the possibility of expanding our tiny “master bedroom.” It’s been fine for vacations, but it will be cramped when we’re living there fulltime. After considering the cost and the impact of the changes on our cute little house, we’ve decided to take on the challenge of living in it as is for our first five months of retirement, until we hit the road in our RV. This will force us to live simply and see how we can function and get along in such close quarters. After all, an RV is even smaller than our 700—square-foot lake house.

Our lake house is already furnished, so that limits the furniture we will be able to keep and move to the lake house. We want to replace a few pieces there so that we can take my father’s rocking chair, for example, and a larger bookcase, perhaps a set of my grandmother’s nesting tables to replace an end table in the living room.

Deciding what to sell through eBay or craigslist, what to give away through freecycle or a local cause, what to throw away because no one is going to want it (why have we kept it anyway?), and what to save for our own or our church’s yard sale.

Helping our now-young-adult children to downsize as they move on to college or their own apartments.
When my parents were moving from the house I grew up in, they made me sort through all the boxes I was storing in their attic. I cleared out high school papers, letters, books, and so on. I remember it being hard to part with so many items. When I was finished, they took a look and said I had to get rid of a lot more or pay to store it somewhere. They were not moving it to South Carolina with them! I will empathize with my kids’ dilemma of wanting to keep a lot of their stuff, while taking my parents’ firm stand to get rid of more. Or so I hope.

We know that lots of people say they don’t miss the items they put in storage and eventually get rid of them. Storage isn’t free, either. We’ll be storing some of our favorite items for now because we might want to sell our lake house and settle somewhere else, and will want to use our favorite or cherished items to help furnish a new house or apartment. Not knowing makes it hard. Not wanting to let go of some of our favorite family heirlooms means that we’ll have to store them while we’re living in our small house and RVing.

For right now it relieves a tiny bit of the pressure to know that we’ll need to keep some things for use in the RV as well as things for the lake house.

I’m glad we’ve got eight months to figure it all out. I also know that the last few months will be pretty hectic and crazy.

If you’ve done major downsizing, I’d love to hear your tips on how to approach the daunting task with the least amount of stress possible.